These are among the most common molds you will find in a residence. These large club-shaped spores grow in chains. This is a dark mold, associated with asthmatic reactions and other symptoms. The little "lips" on one end of the spores are characteristic of Alternaria. The photo above is of a young fruiting body, where you can see the bulbous “fruiting body,” which will later be covered with spores - see the picture below. The blackness is from an air bubble from the stain that was added to the tape for viewing under a microscope. In the bubble, there are hundreds upon hundreds of spores. This photo illustrates why spore trap air sampling in wall cavities may not deliver a realistic idea of how much mold is in the wall cavity. A little bit of mold can give off so many spores. Eurotium, above, is the sexual form of Aspergillus. Spores leave the large structure through the circled exit hole. Under the microscope, the bulbous structures typically are yellowish and easy to pick out. Aspergillus fumigatus (above) - reportedly responsible for about 80% of the fungal lung infections in immunocompromised individuals. Notice the thick “necks” of the stalks. Though Aureobasidium (above) is counted on the ERMI and CAP-15 tests, I don’t see it very often in my samples. When discussing this with a lab director, he confirmed that he didn’t see very often in samples, either. He said that I wasn’t the only inspector who brought this up to him. He is wondering if there is some sort of cross-reactivity, say with skin flakes, that makes DNA that looks like that of Aureobasidium. Above are some Chaetomium lemon-shaped mold spores. They grow in a huge sea urchin-like structure with "spicules" extending out - see the next photo below. Then the body ruptures and spores are released. 600X 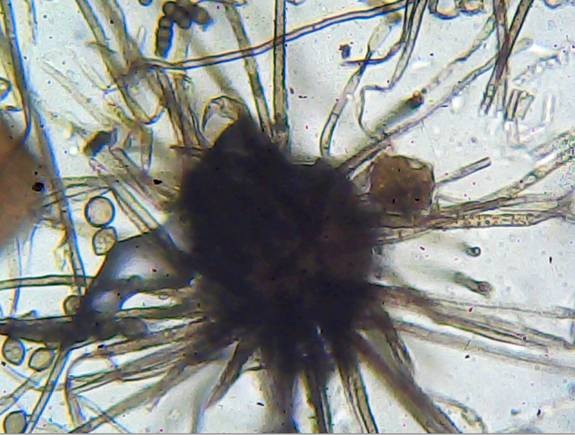 Above is the spider-like structure of Chaetomium, inside of which the spores form. Magnified at 150X. If one of these were pictured at 600X, it would fill up the whole photo. Cladosporium (above) is the common mold that would grow on a shower curtain, bathroom ceiling, window sill. It grows due to condensation and is fairly well behaved. Spores do not become airborne as easily as some other common molds, so mold growth can just be wiped off with a damp sponge and a little Borax powder.

Notice that there are some bi-cellular spores, some banana or revolver-shaped spores, and some spores with points on the tips. A different species of Cladosporium

Above is a different species of Cladosporium. Note the torpedo-shaped spores. In this photo, you don’t see many bicellular spores or spores with pronounced points on the tips. Another species of Cladosporium

Above is a third species of Cladosporium, one often seen on old wood and in Air Conditioning units. Here, there appear to be only some bicellular spores. Curvularia - common in dust samples. Rarely have I seen this mold growing in a house, though spores are common, probably blown in from the outside. The photo is included because the spores look like croissants. (600X) General comment: Mucor (above) can grow on skin, making for a rash. Occasionally, it can grow inside the body. Long ago, I read of a woman dying from such a fast-moving fungal infection with Mucor. In homes, Mucor might grow in a damp basement but is not seen that often. Mucor is not listed on ERMI tests. Another species of Penicillium

Another species of Penicillium. (600X) Young Stachybotrys, growing like "grapes on a stick" (600X) 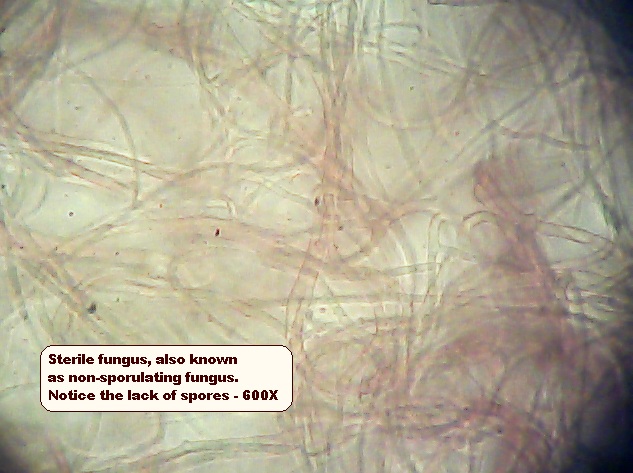 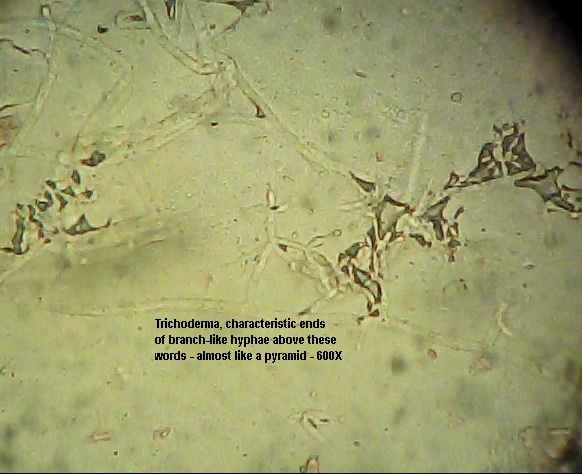 Trichoderma. Note the characteristic ends of branch-like hyphae - almost like a pyramid. (600X)

Another characteristic of Trichoderma under the microscope is small roundish clumps of spherical spores (see the photo below). There is a green tinge to the mold. One of the best places to find Trichoderma (where you can visually see it) is in basement sub-flooring at plumbing access holes. The dark green grows in the wood grain. Trichoderma has characteristic small clumps of spores. Even though the spores are spherical, these clumps are not found with Aspergillus and Penicillium, which also have larger spores. (600X) 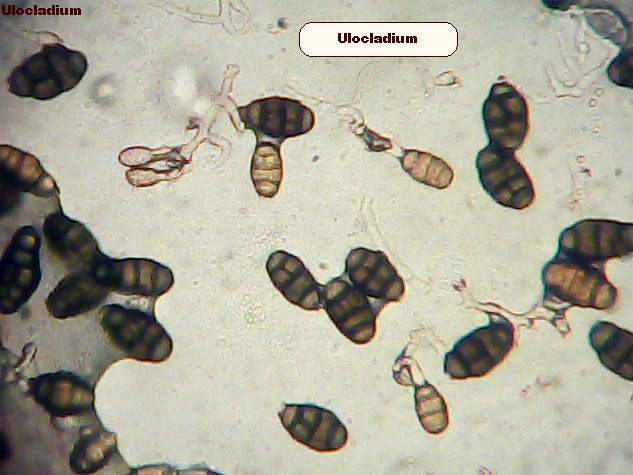 Ulocladium is another black mold common found at leakage and condensation areas. Wallemia is common on ERMI and HERTSMI tests. These spores look somewhat like Aspergillus/Penicillium at first but many of the spores are cuboidal in shape. Rhizopus, showing spore formation – a mold that sometimes overgrows a plate, thus suppressing the growth of other molds. These culture plate air samples were taken from a wall cavity where there had been chronic plumbing leakage. High Aspergillus tereus grew in the left plate and Penicillium in the right plate. Aspergillus tereus is not listed on the ERMI test.

I was trying out two different types of media here, DG-18 and MEA-II, but the same molds grew on both plates, though you had to turn the plates over to be convinced of the similarities. DG-18 is what I usually use, because it contains a suppressant for fast-growing molds, such as sterile fungi. I wouldn’t want to take 20 air samples in a house and end up with 20 plates all overrun with white fuzzies, i.e., sterile fungi. Such plates would be useless to an investigation. A quiz: notice the black grape-shaped Stachybotrys spores, the lemon-shaped Chaetomium spores, and the smaller spherical Aspergillus/Penicillium-like spores. You see? You can do this. Not rocket science!