First, here is my “cheat sheet” used as the basis for various talks, etc., on mold. This is like a summary sheet for Mold 101: 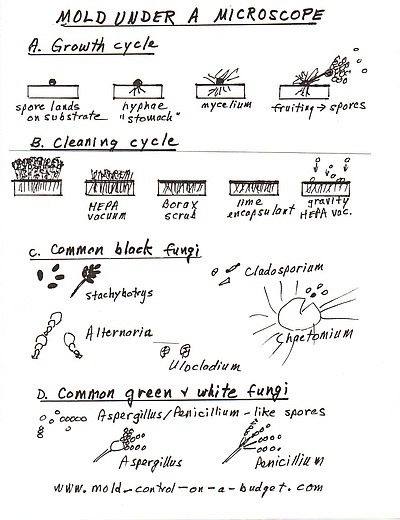 Mold Under a Microscope

Let’s go over the above chart.

The growth cycle of mold

Think of a plant and what happens with a seed, only with mold, the seed is known as a spore and the roots and branches are “hyphae.” The fruit is made by the fruiting body. The whole plant is known as the mycelium.

There are about five common black molds – discussed below

There are two common green/white molds

In the next section, you’ll see actual photos that I made of mold under a microscope, but first we’ll talk more about the above genera of mold. “Genus” is the main biological category that ranks below family and above species. The family here is Fungus. The genus is Aspergillus. There are 200+ species of Aspergillus in the genus.

There are numerous websites providing photos of what different fungi look like under the microscope. Just do a search on the mold you want: “Penicillium + picture + microscope.” Dennis Kunkel, www.denniskunkel.com, has exceptional pictures of mold under an electron microscope. His photos are works of art.

Again, one or more of these genera are the main players at most houses with mold:

- Alternaria – club-like spores, sometimes in short chains; the largest of the common spores

- Aspergillus – chains of spherical spores, produced from fruiting bodies that look like a flower

- Cladosporium – varying shapes of spores, such as narrow ovoid (three-dimensional oval) sometimes with black connection points on ends where they once joined to other spores; bi-cellular spores (spores with two cells); banana, torpedo, shield-shaped, etc., spores

- Penicillium – chains of spherical spores, extending off the ends of brush-like structures

- Stachybotrys – mottled black grape-like spores, at the end of a stalk like a bunch of balloons or grapes. “Stachybotrys” means “grapes on a stick.”

- Ulocladium – segmented and broadly ovoid, somewhat like an elongated berry or a hand-grenade

And then, there are other molds, such as Acremonium, Trichoderma, Mucor, Syncephalastrum, and Rhizomucor, but in the average house, I find the ones listed above to be more common.

Some observations on the more common indoor molds

First, let’s stop and talk for moment about black molds, and what makes black molds black. These molds contain melanin, as do we, to protect them from UV C in sunlight. The mold could be wiped off, such as Cladosporium from a bathroom ceiling, but the melanin stain will remain. That could be treated with a mold stain remover or painted over.

Interestingly, since Cladosporium is the most common mold to grow on AC coils, adding UV light to the coils may not do too much to retard mold growth. Save your money, and get a better filter – discussed elsewhere.

See a photo of Alternaria

Trichoderma (not pictured on the summary chart above)

Mucor, Rhizomucor, and others are genera that like chronic dampness, either long-term ambient dampness or shorter-term floods and leaks that weren’t cleaned up right away.

Let’s pause for a moment and consider bacteria.

As research progresses, one of my microbiology professors may be proved right, that bacteria growing in homes may prove to be of more importance for health than mold. Or, mold and bacteria could interact or be synergistic, that is, health effects from the sum of their interactions would be greater than the sum of either one’s added together.

Bacteria are single-celled organisms that are smaller than mold when viewed under a microscope and obtain their nourishment by dissolving and absorbing organic matter. At 600x, there might be a film visible on the tape, with lots of little rods or ovals in the film. You might only know that bacteria are present by seeing the edge of the film, kind of like the edge of a cloud.

Bacteria need food and water to grow, but they die or form spores when they dry out, so they are more often found in chronically wet or damp areas. Like mold, bacteria give off toxins and other substances, contributing to health reactions similar to those from mold exposure. Bacteria can grow in films, spreading over a surface, with the film taking on characteristics of its own.

Bacteria grow faster than mold. If there is water damage, bacteria will be on the scene before mold. For example, Stachybotrys often grows together with Streptomyces.

Bacteria, such as Pseudomonas, can also be found in some filtered water when proper maintenance is not kept up. That will be discussed in the water section later.

Biofilms are a relatively recent field of study, thanks to new developments in laser microscopy. Biofilms are an aggregation of bacteria, mold, or a mix. This incredible definition, from the website, www.MedicineNet.com, sounds right out of science fiction:

“Biofilm: An aggregate of microbes with a distinct architecture. A biofilm is like a tiny city in which microbial cells, each only a micrometer or two long, form towers that can be hundreds of micrometers high. The “streets” between the towers are really fluid-filled channels that bring in nutrients, oxygen and other necessities for live biofilm communities.”

Biofilms are common health hazards with various medical conditions, such as in periodontal disease and cystic fibrosis pneumonia, as well as in contamination of urinary catheters and medical implants. Millions of people are affected annually by biofilms.

“Sharlot,” a former real estate agent, called for information about having her home tested for mold. She was extremely fatigued, essentially bed-bound, and wanted to explore all avenues for getting better. I asked why she felt the house might be contributing to her chronic fatigue. Then she told me this story, which I have condensed here, changing details for confidentiality.

She had had breast implants, became ill, and wondered if “mold” [biofilm?] could be contaminating the implants. So she went to a surgeon specializing in the removal of implants. Sharlot wanted the old implants taken out and new ones put in, but the surgeon declined, saying that she was too ill. So she went on antibiotics for six months [further weakening her], felt better, and then found a different surgeon who did what she wanted.

She told me that he accidentally ruptured the old implants in her body, and this concerned her. She had also wanted testing done on the old implants, but that wasn’t done. As the original surgeon predicted, her health went downhill with the new implants.

Interwoven throughout this story is a tale of months on various antibiotics and cortisone and other medications. Then she heard that carpeting makes some people ill, so she got rid of her carpeting and had new carpeting installed. From her description, the house is probably moldy. And she smokes. This young mother was having one toxic burden after another piled on her body, a body which was struggling to bear up under the load but losing ground. She wanted, she said, just to be able to do things with her children, to meet them at the bus in something other than pajamas. Sharlot was 28 years old at the time.

Note: Implant material has been problematic for many women, who have had to have the implants removed, only to be left with continuing health conditions. One woman kept an implant in the freezer, and I tested it and found Aspergillus.

Biofilms are also present in the environment, such as inside water pipes. Chlorine doesn’t kill bacterial films growing in and around flaking pipe interiors. Some communities are adding ammonia to public water to try to get rid of bacteria missed by chlorine, as well as to cut down on levels of carcinogenic chlorine by-products. An Internet search on “biofilms” will bring up many interesting sites.